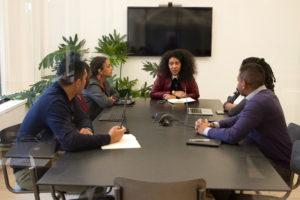 Despite an increased focus on social justice issues, there continue to be barriers when it comes to corporate clients sending legal work to minority and women-owned law firms, according to a study by the National Association of Minority and Women Owned Law Firms (NAMWOLF) and the Institute for Inclusion in the Legal Profession (IILP).

The first of its kind study, which was conducted in 2019 and 2020, aimed to explore the amount and type of legal work corporate clients direct toward diverse-owned law firms and the criteria used in selecting outside counsel.

The findings show that while a large majority of respondents said they had recently assigned legal work to a diverse-owned law firm, just 35% of all outsourced legal work went to these firms. Moreover, the average percentage of diverse-owned firms on preferred provider lists was only 22%. Source: “Understanding and Assessing the Use of Minority- and Women-Owned Law Firms by Corporate Clients,” NAMWOLF and IILP 2022

“Women- and minority-owned firms have been a great place for women and minorities to practice law at the highest levels while providing unique value to corporations without some of the frustrations of large law firms,” said NAMWOLF CEO Leslie D. Davis in a press release. “The long-term viability of law firms owned by women, minorities, openly LGBT people, and people with disabilities will depend on corporate clients’ continued assignment of work to them.”

The NAMWOLF and IILP survey includes responses from 102 companies on their use of diverse-owned law firms. The survey was posted between June 2019 and June 2020.

The majority of respondents identified as Fortune 500 companies, but Fortune 1000 and other publicly- and privately held companies responded as well.

Of the diverse-owned firms that respondents reported using, most were owned by women (18%). Other minority-owned firms were less likely to be used, coming in at 4%. LGBTQ and disability-owned firms were also used less than 3% of the time, but NAMWOLF’s analysis of the data acknowledged firms have less awareness or familiarity with these firms.

Second, respondents were asked if their company had decided to take any new actions based on public attention paid to social justice or racism or racial disparities in 2020. Twenty-nine percent indicated that their companies had decided to take new actions. Written responses detailed actions such as monetary donations, expanding DEI work, and more.

What corporate clients are looking for in firms

When asked what’s most important to corporate counsel when selecting a large, majority-owned firm or a diverse-owned firm, the expertise of individual lawyers at the firm, the anticipated outcome, and the potential dollar value of the matter assigned were the most important factors, with each rated by more than 60% of respondents as “very important.”

Respondents were also asked what factors would lead clients to choose a diverse-owned firm over a large, majority-owned firm. Most respondents said expertise, “almost to the exclusion of anything else,” according to the report. However, value and ensuring that diversity and inclusion are made a priority were also mentioned.

How diverse firms can break through

NAMWOLF and IILP recommend that corporate clients review and develop improved practices to identify and remove barriers to using diverse-owned law firms, like a lack of representation of diverse lawyers in leadership and hiring roles. In addition, corporate clients should be vigilant in establishing and continuing to measure the success of solutions.